CHAPTER 6 The Self-sufficiency of God

“The Father hath life in himself,” said our Lord, and it is characteristic of His teaching that He thus in a brief sentence sets forth truth so lofty as to the transcend the highest reaches of human thought. God, He said, is self-sufficient; He is what He is in Himself, in the final meaning of those words.

Whatever God is, and all that God is, He is in Himself. All life is in and from God, whether it be the lowest form of unconscious life or the highly self-conscious, intelligent life of a seraph. No creature has life in itself; all life is a gift from God.

The life of God, conversely, is not a gift from another. Were there another from whom God could receive the gift of life, or indeed any gift whatever, that other would be God in fact. An elementary but correct way to think of God is as the One who contains all, who gives all that is given, but who Himself can receive nothing that He has not first given.

To admit the existence of a need in God is to admit incompleteness in the divine Being. Need is a creature-word and cannot be spoken of the Creator. God has a voluntary relation to everything He has made, but He has no necessary relation to anything outside of Himself. His interest in His creatures arises from His sovereign good pleasure, not from any need those creatures can supply nor from any completeness they can bring to Him who is complete in Himself.

Again we must reverse the familiar flow of our thoughts and try to understand that which is unique, that which stands alone as being true in this situation and nowhere else. Our common habits of thought allow for the existence of need among created things. Nothing is complete in itself but requires something outside itself in order to exist. All breathing things need air; every organism needs food and water. Take air and water from the earth and all life would perish instantly. It may be stated as all axiom that to stay alive every created thing needs some other created thing and all things need God. To God alone nothing is necessary.

The river grows larger by its tributaries, but where is the tributary that can enlarge the One out of whom came everything and to whose infinite fullness all creation owes its being?

Unfathomable Sea: all life is out of Thee,
And Thy life is Thy blissful Unity.
Frederick W. Faber

The problem of why God created the universe still troubles thinking men; but if we cannot know why, we can at least know that He did not bring His worlds into being to meet some unfulfilled need in Himself, as a man might build a house to shelter him against the winter cold or plant a field of corn to provide him with necessary food. The word necessary is wholly foreign to God.

Since He is the Being supreme over all, it follows that God cannot be elevated. Nothing is above Him, nothing beyond Him. Any motion in His direction is elevation for the creature; away from Him, descent. He holds His position out of Himself and by leave of none. As no one can promote Him, so no one can degrade Him. It is written that He upholds all things by the word of His power. How can He be raised or supported by the things He upholds?

Were all human beings suddenly to become blind, still the sun would shine by day and the stars by night, for these owe nothing to the millions who benefit from their light. So, were every man on earth to become atheist, it could not affect God in any way. He is what He is in Himself without regard to any other. To believe in Him adds nothing to His perfections; to doubt Him takes nothing away.
Almighty God, just because He is almighty, needs no support. The picture of a nervous, ingratiating God fawning over men to win their favor is not a pleasant one; yet if we look at the popular conception of God that is precisely what we see. Twentieth century Christianity has put God on charity. So lofty is our opinion of ourselves that we find it quite easy, not to say enjoyable, to believe that we are necessary to God. But the truth is that God is not greater for our being, nor would He be less if we did not exist. That we do exist is altogether of God’s free determination, not by our desert nor by divine necessity.

Probably the hardest thought of all for our natural egotism to entertain is that God does not need our help. We commonly represent Him as a busy, eager, somewhat frustrated Father hurrying about seeking help to carry out His benevolent plan to bring peace and salvation to the world, but, as said the Lady Julian, “I saw truly that God doeth all-thing, be it never so little.” The God who worketh all things surely needs no help and no helpers.

Too many missionary appeals are based upon this fancied frustration of Almighty God. An effective speaker can easily excite pity in his listeners, not only for the heathen but for the God who has tried so hard and so long to save them and has failed for want of support. I fear that thousands of younger persons enter Christian service from no higher motive than to help deliver God from the embarrassing situation His love has gotten Him into and His limited abilities seem unable to get Him out of. Add to this a certain degree of commendable idealism and a fair amount of compassion for the underprivileged and you have the true drive behind much Christian activity today.

Again, God needs no defenders. He is the eternal Undefended. To communicate with us in all idiom we can understand, God in the Scriptures makes full use of military terms; but surely it was never intended that we should think of the throne of the Majesty on high as being under siege, with Michael and his hosts or some other heavenly beings defending it from stormy overthrow. So to think is to misunderstand everything the Bible would tell us about God. Neither Judaism nor Christianity could approve such puerile notions. A God who must be defended is one who can help us only while someone is helping Him. We may count upon Him only if He wins in the cosmic seesaw battle between right and wrong. Such a God could not command the respect of intelligent men; He could only excite their pity.

To be right we must think worthily of God. It is morally imperative that we purge from our minds all ignoble concepts of the Deity and let Him be the God in our minds that He is in His universe. The Christian religion has to do with God and man, but its focal point is God, not man. Man’s only claim to importance is that he was created in the divine image; in himself he is nothing. The psalmists and prophets of the Scriptures refer sad scorn to weak man whose breath is in his nostrils, who grows up like the grass in the morning only to be cut down and wither before the setting of the sun. That God exists for himself and man for the glory of God is the emphatic teaching of the Bible. The high honor of God is first in heaven as it must yet be in earth.

From all this we may begin to understand why the Holy Scriptures have so much to say about the vital place of faith and why they brand unbelief as a deadly sin. Among all created beings, not one dare trust it itself. God alone trusts in himself; all other beings must trust in Him. Unbelief is actually perverted faith, for it puts its trust not in the living God but in dying men. The unbeliever denies the self-sufficiency of God and usurps attributes that are not his. This dual sin dishonors God and ultimately destroys the soul of the man.

In His love and pity God came to us as Christ. This has been the consistent position of the Church from the days of the apostles. It is fixed for Christian belief in the doctrine of the incarnation of the Eternal Son. In recent times, however, this has come to mean something different from, and less than, what it meant to the early church. The Man Jesus as He appeared in the flesh has been equated with the Godhead and all His human weaknesses and limitations attributed to the Deity. The truth is that the Man who walked among us was a demonstration, not of unveiled deity but of perfect humanity. The awful majesty of the Godhead was mercifully sheathed in the soft envelope of Human nature to protect mankind. “Go down,” God told Moses on the mountain, “charge the people, less they break through unto the Lord to gaze, and many of them perish”; and later, “Thou canst not see my face: for there shall no man see me, and live.”

Christians today appear to know Christ only after the flesh. They try to achieve communion with Him by divesting Him of His burning holiness and unapproachable majesty, the very attributes He veiled while on earth but assumed in fullness of glory upon His ascension to the Father’s right hand. The Christ of popular Christianity has a weak smile and a halo. He has become Someone-up-There who likes people, at least some people, and these are grateful but not too impressed. If they need Him, He also needs them.

Let us not imagine that the truth of the divine self-sufficiency will paralyse Christian activity. Rather it will stimulate all holy endeavor. This truth, while a needed rebuke to human self-confidence, will when viewed in its Biblical perspective lift from our minds the exhausting load of mortality and encourage us to take the easy yoke of Christ and spend ourselves in Spirit-inspired toil for the honor of God and the good of mankind. For the blessed news is that the God who needs no one has in sovereign condescension set Himself to work by and in and through His obedient children.

If all this appears self-contradictory - Amen, be it so. The various elements of truth stand in perpetual antithesis, sometimes requiring us to believe apparent opposites while we wait for the moment when we shall know as we are known. Then truth which now appears to be in conflict with itself will arise in shining unity and it will be seen that the conflict has not been in the truth but in our sin-damaged minds.

In the meanwhile our inner fulfilment lies in loving obedience to the commandments of Christ and the inspired admonitions of His apostles. “It is God which worketh in you.” He needs no one, but when faith is present He works through anyone. Two statements are in this sentence and a healthy spiritual life requires that we accept both. For a full generation the first has been in almost total eclipse, and that to our deep spiritual injury.

Fountain of good, all blessing flows
From Thee; no want Thy fulness knows;
What but Thyself canst Thou desire?
Yet, self-sufficient as Thou art,
Thou dost desire my worthless heart.
This, only this, dost Thou require.
Johann Scheffler 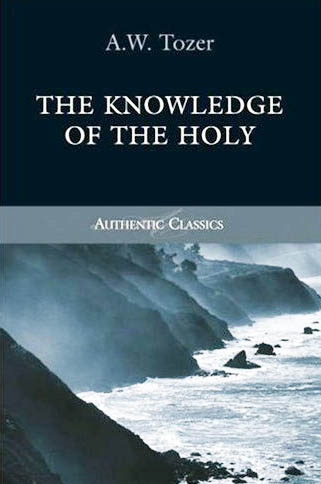